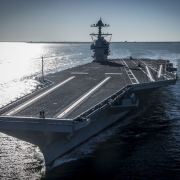 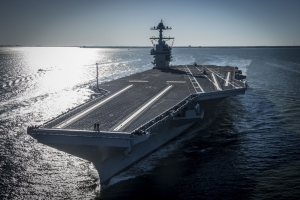 The United States Navy will commission the first of a new generation of aircraft carriers into service later this month on July 22.

When she is commissioned, the future USS Gerald R. Ford (CVN-78) will represent the future of naval aviation and will be the most advanced and capable aircraft carrier ever built.

With Ford’s imminent commissioning ceremony coming up later this month, the Navy invited The National Interest to preview the mighty warship and see the new vessel’s technology firsthand on July 10.

Immediately noticeable is that Gerald R. Ford’s island is not only smaller than that of the Nimitz-class carriers, but that the structure is set further astern by about 140ft and slightly further starboard. Moreover, unlike regular fleet carriers, the brand-new Ford is still in pristine condition and sports a gold-painted anchor—a badge of honor noting that she has an exceptionally high crew retention rate.

Entering the massive vessel via one of her three aircraft elevators—Nimitz-class ships have four—into her cavernous hangar bay, Ford’s interior looks similar to that of other carriers. However, whereas the Nimitz-class has three partitions in their hangar bays, the new CVN-78-class has only two in order to simplify maintenance.

As we walked into the interior to climb up to the bridge, the air conditioning is immediately noticeable. Ford is able to produce 9,900 tons of air conditioning—which not only makes for a more productive crew but should reduce maintenance requirements for new vessels because of reduced humidity. Indeed, the key tenant of the entire CVN-78-class is improved maintainability and efficiency. Unlike previous carriers, Ford is projected to enter drydock only once every 12 years.

Climbing up into Ford’s bridge, the systems are far more advanced than anything else in the Navy’s fleet other than the new Zumwalt-class guided missile destroyers. All of the controls and navigational systems are completely digital and use touch-screen interfaces. The only concession to the past is a metal wheel connected to an electronic steering and transmission system—though the ship does have backup systems.

Primary flight control—which is a few more decks up on the island—is similarly high-tech, but aside from a few modifications to the firefighting system—the setup is very similar to the Nimitz-class according to Lt. Commander Jon Biehl, Ford’s mini-boss (deputy air boss) and Boeing F/A-18 Super Hornet pilot. Biehl said he is very confident in the new carrier’s systems though the ship has yet to be tested in launching and recovering real aircraft.

Several decks down in Flight-deck Control, I was surprised to see a traditional “Ouija board,” which visually indicates the position and status of aircraft on the ship’s flight deck using scaled aircraft templates and various pins and washers. Ford has automated systems that track the location and status of the ship’s aircraft, but the crew setup the Ouija board as a manual backup—and for the sake of tradition.

“This was not part of the ship’s design, this was taken out because we have a system that will track the aircraft called ADMACS [Aviation Data Management and Control System.”

Our next stop was the flight-deck, which we reached via the hangar bay via one of Ford’s three aircraft elevators. Ford’s rearranged and reconfigured flight deck—which is 1,106ft long and somewhat wider than the Nimitz-class’—visibly looks and feels considerably larger than that of previous generation aircraft carriers.

Underneath, the massive steel deck, Ford is equipped with four Electromagnetic Aircraft Launch Systems (EMALS) and an Advanced Arresting Gear (AAG) which are replacing their steam and hydraulically driven equivalents onboard the Nimitz-class (and which allows for unrestricted operation of the #4 catapult). The ship also features 40 refueling stations and a revised configuration for her weapons elevators. The ship could achieve between 25 and 33 percent greater sortie generation rates than her predecessors once she has been fully tested according to Navy projections.

Capt. Brent Gaut, Ford’s executive officer, said that the next steps for the ship and her crew after commissioning will be to move into the test and evaluation phase. By the end of July, the ship is expected to set sail for a 10 to 12-day shakedown period where the crew will begin to test all of Ford’s systems including the EMALS and AAG. If all goes well, the ship will be certified to launch and recover aircraft by the end of September or early October.

“The systems I think, in theory, are just phenomenal and designed to perform a certain way,” Gault said.

“And now the challenge is to be able to go out and make sure they are able to meet the mark and they allow us to do what we need to do, which is put the ship in harm’s way and go out and fight the fight. So we need to make sure we get there first.”

Capt. Rick McCormack, Ford’s commanding officer, said that the ship has already tested the EMALS and AAG with dead loads, and as such, he is very confident that the systems will work as advertised. Indeed, both systems have proven themselves in testing, but the Navy has to be certain that they meet operational standards at sea.

“I’m very very confident that the EMALS will do everything we need it to,” McCormack said.

“But bottom line, that’s why we’re here. We’re here to test and evaluate these systems.”

As McCormack explained, the Navy will use the post-commissioning shakedown to test all of the new systems onboard Ford to identify any deficiencies or fixes that might need to be made. Ford will then move into a post-shakedown availability where the shipyard will make any needed corrections and install certain critical components onboard the ship that have yet to be installed. One such system is Ford’s Dual Band Radar, McCormack said, where there is still ongoing work that must be completed.

Subsequently, the ship will then go out to sea for another shakedown cruise to ensure that all of the corrections and new systems work properly, McCormack said. If all goes well, the ship should be operational by 2020. If the current schedule holds, Ford should be able to work up with an air wing and deploy in 2021 or 2022.

“If you go out there, and it doesn’t work quite right and you have to redesign—or there’s something they can do so that it works a little better—that takes time.”

Ford seems to be delivering on the promise of a more efficient carrier that will take naval aviation into the future. Ford—which is based on the Nimitz-class hull form—restores weight and stability margins by reconfiguring the ship’s interior, though she displaces roughly 100,000-tons just like the CVN-68 class (Indeed, one officer noted that while a sea, Ford is much more sporty than the Nimitzthanks to her prodigious horsepower and reconfigured interiors). But more importantly, Ford adds improved survivability measures while reducing manning and maintenance requirements. If all of Navy’s projections are realized, the service will save $4 billion in total ownership costs over the life of the ship.

For operators like McCormack—a career Boeing F/A-18E/F Super Hornet pilot—they just want to take the ship out and launch jets. Indeed, McCormack said that he wants to be among the first aviators to “trap” onboard Ford.

“As an operator, I just want to go to sea,” McCormack said.

“I want to launch airplanes and catch them and hopefully get a launch and an arrestment myself in a Super Hornet.”

Dave Majumdar is the defense editor for The National Interest. You can follow him on Twitter: @Davemajumdar.

WASHINGTON — The U.S. Navy is looking for inputs from industry on a new multimission guided-missile frigate adapted from existing ship designs, a major departure from its modular littoral combat ship, according to a request for information released Monday.

The RFI lays out a ship that opens the door to almost any existing design that can be adapted to the Navy’s needs, which extends beyond just the two LCS hull forms being built by Lockheed Martin and Austal USA.

The service is looking for a ship with combat and mechanical systems that will fully integrate with a carrier strike group, hunt submarines and kill ships over the horizon. Labeling the ship the FFG(X), the ship will be expected to keep up with the full carrier strike group and be able to operate independently in high-end threat environments.

The Navy is looking to avoid “sticker shock,” said Rear Adm. Ronald Boxall, the service’s director of surface warfare, said in a Monday telephone interview, and engage with ship builders about what trade-offs the Navy would have to make to get the most capability from the ship.

“This is an effort to get the design right up front,” Boxall said. “We’re looking to have a dialogue with industry to get the most capability for the best price.”

Boxall did not say how much the U.S. Navy is willing to spend but said the RFI was intended to draw out what the U.S. Navy could get for its shipbuilding dollar.

In order to get the ship to the fleet as fast as possible, the U.S. Navy wants builders to adapt from existing designs, the RFI said.
“A competition for FFG(X) is envisioned to consider existing parent designs for a Small Surface Combatant that can be modified to accommodate the specific capability requirements prescribed by the US Navy,” it reads.
The U.S. Navy wants a frigate that can keep up with the aircraft carrier — a nagging problem with the current classes of small surface combatants — and have sensors networked in with the rest of the fleet to expand the overall tactical picture available to the group.
“The FFG(X) will normally aggregate into strike groups and Large Surface Combatant led surface action groups but also possess the ability to robustly defend itself during conduct of independent operations while connected and contributing to the fleet tactical grid.”
The U.S. Navy would like for the ship to be able to:
The U.S. Navy is looking to limit the number of ground-breaking technologies that go into the ship, looking for engineering and combat systems that are already common in the fleet.
The U.S. Navy lists several capabilities, among the most important including:
Other capabilities in “tier two” include various sonar equipment such as variable-depth and towed-array sonar, Cooperative Engagement Capability to be able to share target data with other ships and aircraft in the fleet, rigid-hull inflatable boats, Next Generation Surface Search Radar, and a MK 110 57mm gun and related systems.
The U.S. Navy wants the ship to be used for surface and anti-submarine warfare — traditional frigate roles — and to take on lower-level missions, such as security cooperation, that don’t require multibillion-dollar warships. It also must be hardened against electronic warfare attack.
The U.S. Navy is also particularly interested in having the frigate be a platform for deploying unmanned systems “to penetrate and dwell in contested environments, operating at greater risk to gain sensor and weapons advantages over the adversary.”
The frigate should be able to establish a complicated picture of a tactical environment with its on-board sensors, unmanned systems and embarked aircraft and beam that information back to the fleet through secure communications.

The U.S. Navy intends to award the contract for the first FFG(X) in 2020. It will buy one in 2020 and one in 2021, followed by two each year after that. The U.S. Navy’s requirement is for 52 small-surface combatants, the bulk of which will be LCS.

You can read the entire RFI here.

This story is developing. Check back later for more coverage, including a Q&A with Rear Adm. Boxall on the new design.